Landholders and others from across WA say Labor Leader Mark McGowan’s promise to ban fracking in the South West, Perth and Peel is a step forward but that it does not go far enough and will still leave communities vulnerable to the development of invasive unconventional gasfields throughout the state. 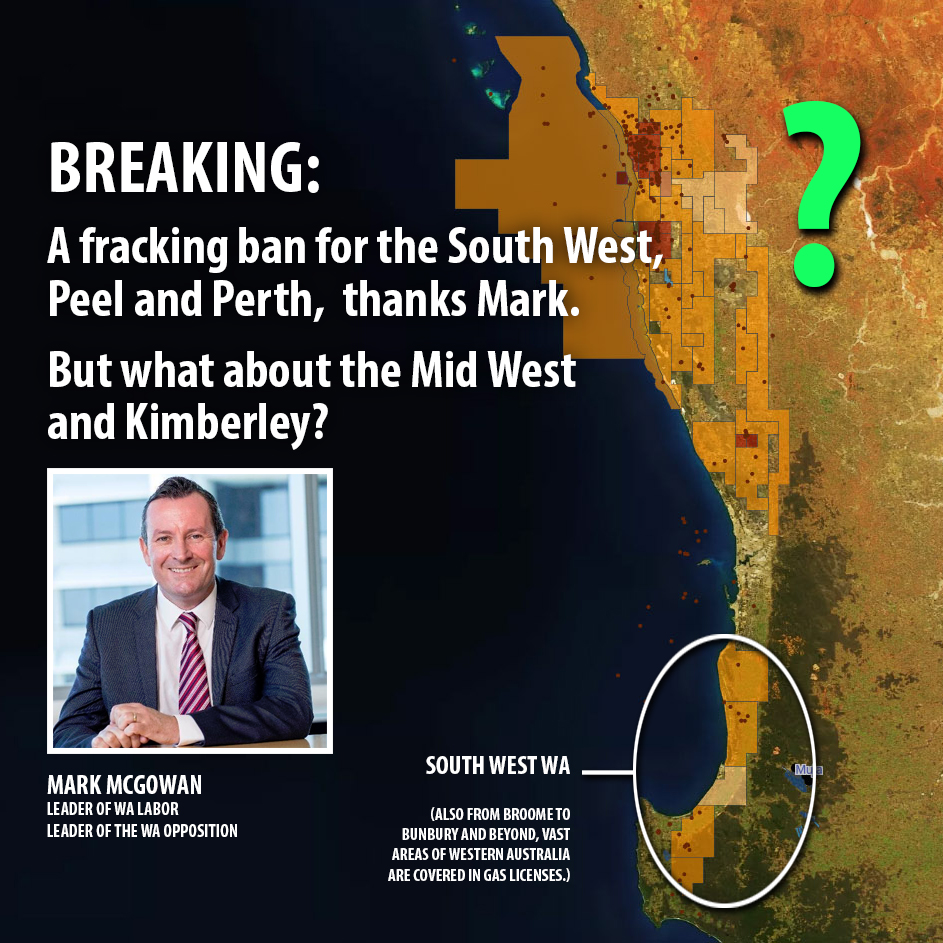 Mid West mango farmer Rod Copeland from Irwin said he was deeply disappointed by Labor’s decision only to ban fracking in the southern areas of the state but welcomed statements recommitting to a state-wide moratorium.

“The fracking industry is already moving into the Mid west and we are at ground zero here. Our land, our water and our health are at risk,” Mr Copeland said.

“We are happy to hear that Labor will press the pause button on fracking with a moratorium on the industry if it comes into office but it is crucial that Mr McGowan makes that a formal part of his electoral platform. We would also like to see  a fracking  ban extended to the Mid West.

“We are an important food growing area and the protection of our water should be a top priority. I would also like the power of veto given to landholders to stop gas companies accessing our private land.”

South west landholder Kathy Thomson from the Boyanup Gasfield Free Group said the ban was a welcome first step but wouldn’t guarantee protection of land, water and health from the unconventional gas industry in her region.

“Our concerns with this invasive industry go much further than fracking. The companies targeting the south west say they don’t plan to frack but will use other new and risky technologies to get gas out of this region,” Ms Thomson said.

“We have existing agricultural and tourism industries in the south west that are incompatible with the industrialization that comes with turning the region into a gasfield will bring.

“Right now we have no right of veto and everything we have worked for - our farms, homes, lifestyles and businesses are at risk from the gas industry pushing its way onto our land and drilling through our precious water resources.

Busselton landholder Mariah de Cerquiera from the Whicher Range Action Group said the ban would not protect her community from plans to drill for gas in the Whicher Range, just 3km from her home.

“The gas industry is moving into this area and has previously test fracked the Whicher Range,” Ms de Cerquiera said.

“Now another company wants to access the area and drill for unconventional gas. They say they won’t frack but will be using a synthetic based mud as the drilling fluid to drill in what is a priority one water resource.

“The company wants to drill just a few kilometres from the Margaret River, through the Yarragadee aquifer that supplies water to much of the south west and to Perth. This ban will unfortunately do nothing to stop that.”

Lock the Gate WA spokesperson Jane Hammond called on Labor to extend the ban to all unconventional gas activities in the south west and other priority regions, and to firmly commit to deliver on their previous promise for a statewide moratorium on onshore unconventional gas development and exploration.

"We're pleased to see the Labor Party responding to widespread community concern on this issue, but they need to go further, and extend the ban to all unconventional gas activities in WA, and to deliver on their previous promises for a state-wide moratorium.

“That's the far-reaching reform that the community wants, and we hope Labor will listen and deliver on it,” Ms Hammond said.