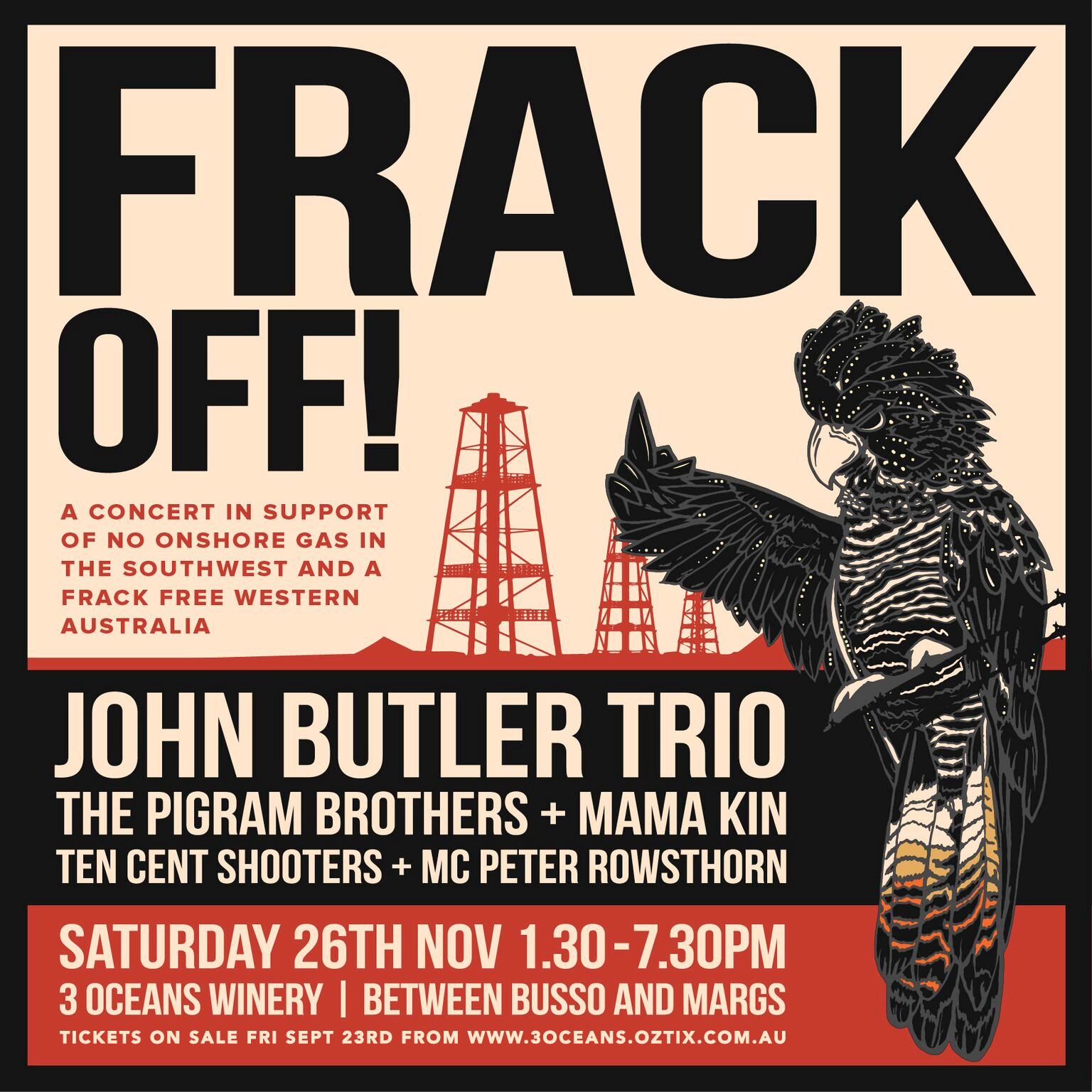 SEPTEMBER 21, 2016: Musician John Butler has organised a massive Frack Off! Concert in Margaret River on Saturday November 26th to raise awareness about the onshore gas industry in WA’s Southwest and fracking throughout the state.

The John Butler Trio will be joined by the beloved Pigram Brothers from Broome, representing the Kimberley region, Mama Kin and Ten Cent Shooters both from Margaret River. Perth based actor and comedian Peter Rowsthorn will MC the event. The low cost concert event will take place on Saturday November 26th at 3 Oceans Winery, between Busselton and Margaret River on the Bussell Highway www.3oceans.com.au .

Limited tickets are on sale this Friday 23 September from www.3oceans.oztix.com.au

Frack Off! presented by Jarrah Records, Gasfield Free Southwest and Lock the Gate will highlight the onshore gas industry’s current push to explore and drill in exploration leases covering nearly 50 million hectares of the state from the Southwest to the Mid West and the Kimberley.

Mr Butler who lives in the Southwest said the gas industry was moving into the region at a rapid pace and was targeting the biodiversity rich Whicher Range just 30km from Margaret River.

“Think about it this way: Who has the most to gain by telling you that the onshore gas industry is safe? The industry itself!

We have nothing to gain by having an onshore gas industry in our state but everything to lose. OUR vested interest lies in our home and communities. Our Land. Our Water.

THIS INVASIVE INDUSTRY puts our water, our tourism, our agricultural industries, our wineries and our health ALL at risk.

The ticket price is really cheap because we want as many people as possible to come along and get informed about what the gas industry has planned for our region and our state. We want the community to be empowered by knowing that we have a voice in this, and that there is something we can do about it. We can tell the gas industry to Frack Off! We can run these pirates out of town."

Several speakers will address the crowd at the FRACK OFF! Concert including Dayne Pratzky, star of the documentary ‘Frackman’, who will explain the impact of living on the frontline of the Queensland gas fields.

Lisa Chatwin Spokesperson for Gasfield Free Southwest, said the Whicher Range was a Priority One water resource area that supplied drinking water for the town of Margaret River.

“We are the driest continent on the planet, we can’t afford to risk our drinking water. The Whicher Range exploration permits overlies the Yarragadee aquifer, which is an important water resource for the whole south west and for the Perth metropolitan area. The Yarragadee and the Margaret River should be protected from the gas industry” Ms Chatwin said. “If we allow the onshore gas industry in the south west, we risk transforming our pristine environment into an industrialised gasfield.  We need to act now to SAVE the south west”.

Spokesperson for Lock the Gate in WA Jane Hammond said a growing number of communities across the state were declaring their districts off limits to fracking and other forms of unconventional gas extraction through Gasfield Free community declarations.

“Victoria is legislating a ban on all unconventional gas mining and the Northern Territory has a moratorium on fracking pending an inquiry. Communities in WA are not alone in standing up to this industry with places like New York State, France, Bulgaria, Spain and Scotland having already brought in bans on fracking,”

Frack Free Future campaign coordinator Jules Kirby said the election in March is a critical opportunity for Western Australians to turn back the unconventional gas industry’s invasion of their State.

“Hard science and court judgments increasingly prove the fracking industry poisons water, pollutes the air and causes birth defects and other serious health issues. Frack Off! is the latest warning from the court of popular opinion - politicians should defend WA from the unpopular and accident-prone onshore gas industry, or pay the price at the ballot box”. Mr Kirby said.

Monies raised from ticket sales and from donations will go towards concert costs and the continued fight against invasive Onshore Gas Mining in WA. Artists are providing their services free and other services are being provided at reduced rates.

Tickets go on sale this Friday 23 September from www.3oceans.oztix.com.au and are strictly limited.

This is a licensed event - under 18’s must be accompanied by a parent or legal guardian.