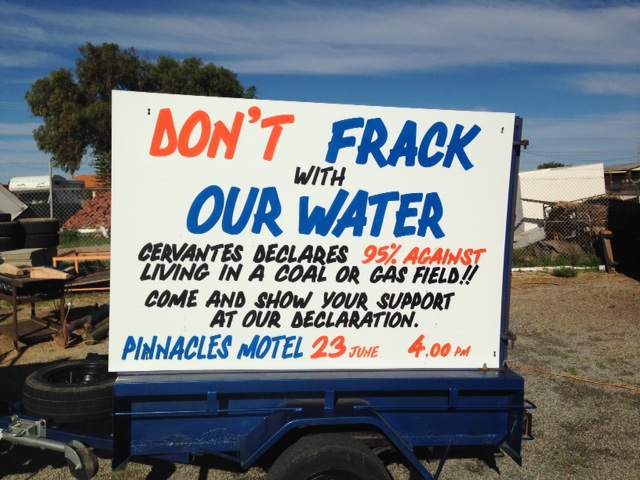 JUNE 9, 2016: The community of Cervantes in WA’s Mid West is about to join scores of other of communities across Australia in declaring themselves Gasfield Free.

The Cervantes Groundwater Protection Group has spent many months surveying members of the local community to see if they would be willing to live in an industrialised gas field.

Spokesperson for the group Steve Taylor said the results were overwhelmingly against the area becoming a gasfield with 95 per cent of all residents in the community opposing the development of gas mining in Cervantes.

“The results are a clear message to the gas industry and the West Australian Government that the people of Cervantes want to remain gasfield free’” Steve said.

“Our survey clearly shows that the gas industry does not have a social licence to operate in this community.”

Cervantes will be the seventh community in WA’s Mid West to declare itself a Gasfield Free Community joining Central Greenough, Irwin, Carnamah, Greenhead, Leeman and Eneabba.

The official Gasfield Free Community declaration will be made on June 23 at a special event in the Pinnacles Motel, Cervantes at 4pm.

The declaration has been timed to coincide with a meeting of the Dandaragan Shire Council, which will meet in Cervantes that evening.

The council covers the towns of Cervantes, Dandaragan, Jurien and Badgingarra and its meetings are held in each of the towns on a rotating basis.

Steve said he was aware that other communities in the Mid West were also preparing to declare themselves Gasfield Free as the movement against fracking and the unconventional gas industry gathered strength across the Mid West.

“We want to protect our land, our water, our health and our way of life,” Steve said.

He said two special trailers set up in Cervantes to announce the event and the success of the survey were attracting a lot of local attention.

“The community have said loud and clear that Cervantes is not the place for an industrialised gas field.”

The official declaration will be presented to the Council following the community event.