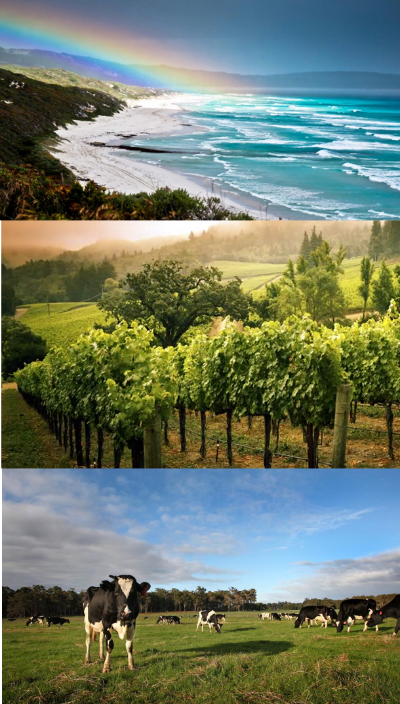 Western Australia’s South West is one of only 36 biodiversity hotspots in the world. It is home to an abundance of plants and animals found no where else on the planet. The region is the state’s most popular tourist destination outside Perth attracting close to 2 million visitors a year who together inject in excess of $1.1B in the local economy per annum.

The South West is known for its natural assets that include towering forests, rolling surf, wild beaches and ancient caves but it has also developed an international reputation for its premium wines and its growing dining culture.

Food and wine tourism is a growing industry across the region as is ecotourism. Agribusiness is also a significant driver with the much of WA’s dairy and beef supplies derived from the lush pastures of the South West. Across the region thousands of agricultural industries cover more than 864,000ha. The South West’s sheep grow premium merino wool which supplies couture markets in Europe and its exotic meats and truffles are sought by restaurants across the globe. Smart and creative industries like filmmaking, animation, art and crafts are also growing in the South West as artists and others are drawn to the region’s relaxed and healthy lifestyle.

Communities across the South West are locking their gates to the gas industry preferring to see the future of the region powered by renewable energy and based on sustainable industries like fresh produce, premium wines and tourism.