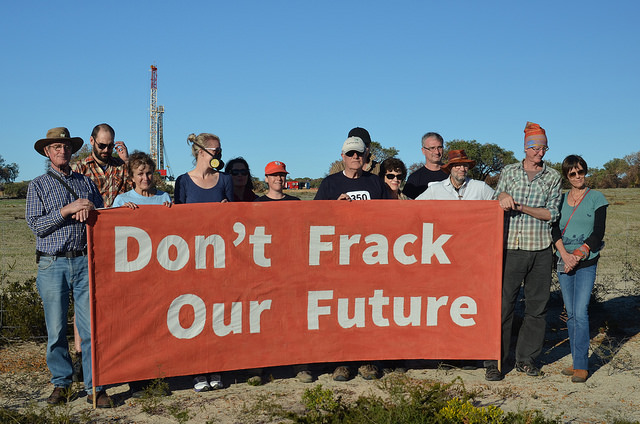 Frack Free Mid West Gascoyne Coordinator Jo Franklin said the decision, announced to the stock exchange today, was a victory for the community and for common sense.

“However we understand AWE has asked that their exploration permit covering the area be renewed so we are still concerned that they may be back.

“The strength of the community opposition to this ill-fated and ill-thought out project has undoubtedly played a major role in knocking it on the head so far,” Ms Franklin said.

“The community came out very strongly against the plans to frack the Drover 1 well with 96.9 per cent of the community in Green Head and 98.1 per cent in Leeman saying they did not want any fracking in their region following a grass roots community survey process.

“Communities across the Midwest are sending a clear message to the fracking industry that it does not have a social license to operate in the region.

“Five communities in the Midwest have already declared themselves Gasfield Free and more are preparing to join them.

“The Drover 1 well was clearly inappropriate as it was sited close to the drinking water supplies for Green Head and just metres from the Mount Lesueur National Park, an area known for its rich biodiversity and environmental values.

“An informed and diligent local community worked hard to make sure that no short cuts were taken in the approvals attached to this project, factors that no doubt made the project less profitable.

“Fracking is not safe, not necessary and not welcome in the Midwest. The communities have spoken and the message to the industry is clear. We will continue to work to protect our land, our water and our health from the frackers.”