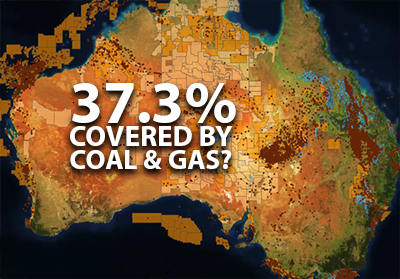 New national mapping of mining tenements across Australia released today reveals that vast areas of Western Australia are at risk, with 50 million hectares of its land mass covered by coal and gas titles and applications.

The mapping was released today as part of the launch of Lock the Gate Alliance’s national campaign – Water4Life – which is putting the impact of coal and unconventional gas mining on water at the centre of the organisation’s Federal election push.

The mapping shows that 37.3% of the Australian continent is covered by coal and gas titles and applications – an area 13 times the size of Great Britain.

As part of the campaign, Lock the Gate is asking politicians and political parties to commit to:

3)      Ensure the health of people and communities.

“This new mapping confirms that Western Australia is in the firing line as one of the states that are most at risk from dangerous unconventional gas mining in Australia” said Boudicca Cerese, spokesperson for Frack Free Western Australia.

“The failure of the West Australian Government to protect our water supplies and our finest agricultural land means that stronger measures are urgently needed at a Federal level.

“At risk are nationally significant water resources, like the Yarragadee aquifer of south-west WA, which is recognised as a vital water source for Perth.

“We want to see these precious water resources protected in no-go zones for fracking and the Federal water trigger strengthened and applied to shale and tight gas fracking.

“It’s also crucial that agricultural protection is given more standing at a Federal level, with new laws that implement the National Food Plan and measures to ensure fracking is not allowed to put our food security at risk.

“We’re also calling for all political parties to give landholders and Indigenous Traditional Owners the right to say no to mining” she said.