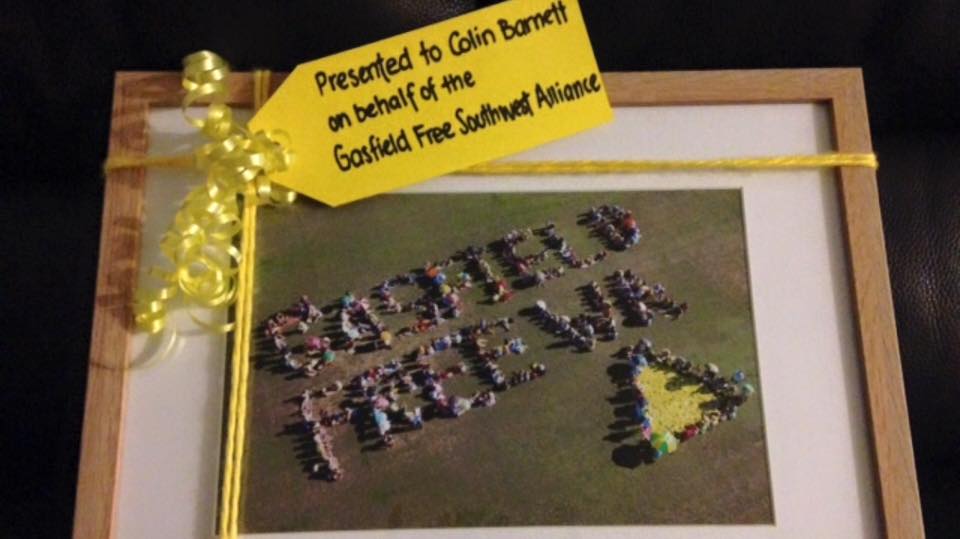 FRIDAY MARCH 10, 2017: The Knitting Nannas Against Gas will today (Friday March 10) attempt to present WA Premier Colin Barnett with a special gift from the people of the South West.

The gift is a photograph taken by a drone of 300 south west residents who came together on February 26 to spell out a special Gasfield Free WA message for Mr Barnett.

Spokesperson for the Nannas Ellen Poole said her group would present the gift on behalf of the Gasfield Free Southwest Alliance who had organized the photo shoot in Boyanup.

“We hope that this gift from the south west can act as a permanent reminder to Mr Barnett or his successor that we the people demand the protection of our land and water from the fracking industry and other forms of unconventional gas,” Ms Poole said.

“We had thought about knitting Mr Barnett a special gasfield free scarf but decided yellow was not his colour so opted to present the photograph instead.

“Hopefully he will agree to see us, after all doesn't everyone like a present from a Nanna.

“Some of us are even hoping to get a selfie with the Premier.

“But we have seen Mr Barnett fleeing from  a Pauline Hanson look alike on the TV and looking awkward with a giant cockatoo so we are not sure how he will react to a gaggle of Nannas.”

The Knitting Nannas Against Gas are a wholesome group of grandmothers and others  that come together to knit, often outside the offices of MPs, in protest at fracking and other forms of unconventional gas activity.

Organiser of the Boyanup photo Carly Stone from the Gasfield Free Southwest Alliance said her group had decided Mr Barnett would probably feel more confortable accepting a gift from the Nannas than farmers and other south west residents.

“Hundreds of us came together to spell out a message loud and clear that we want to remain Gasfield Free. We hope the current and future Premiers will hear that message,” Ms Stone said.

The Nannas will gather outside Mr Barnett’s Cottesloe electoral office from 7.30am this morning as part of a Breakfast with Barnett protest action.