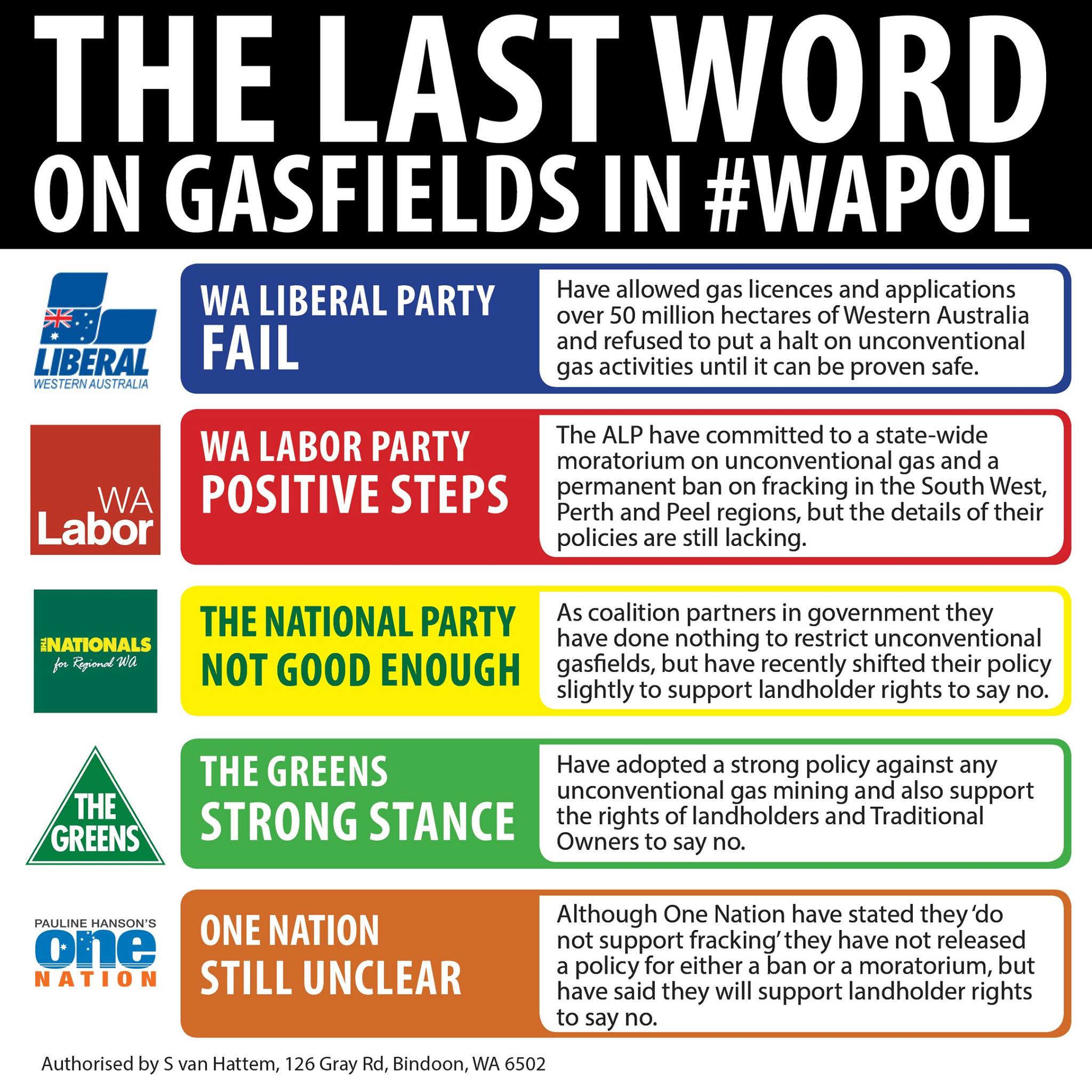 THURSDAY MARCH 9, 2017: With just days to the WA state poll, Lock the Gate Alliance has released an updated scorecard detailing where the political parties stand on fracking and on shore gasfields.

Lock the Gate and local communities have asked all political parties to support a state-wide moratorium on unconventional gas, permanent protection in key areas and the right for landholders and Traditional Owners to say no.

However, the response from parties has varied widely.  The Liberals have failed on all counts, the Nationals and Pauline Hanson's One Nation can still do better, whilst Labor has made some progress and the Greens have released policies most in keeping with community sentiment.

National coordinator for Lock the Gate Carmel Flint said the scorecard was designed to meet the demand from voters statewide for more details on where the parties stood.

“Across the state we are hearing from people keen to find out where the parties all stand on this key election issue,” Ms Flint said.

“There is a good deal of confusion in the electorate with some parties saying one thing but failing to back up their statements with clear policies.

“Others such as the Shooters, Fishers and Farmers don’t even appear to have a policy on the issue despite saying they are targeting regional and rural WA.

“We thought it was time to clarify the situation because we are hearing from people in communities that they want to know before they cast their vote.”

Ms Flint said that the unconventional gas industry had earmarked WA as a hotspot for tight and shale gas developments and was poised to move into the state in a big way.

“With 50M ha of WA already under oil and gas leases or applications this election is crucial for protecting water, productive land and health from the impacts of fracking and other forms of unconventional gas activity.

“We believe it is crucial that WA avoids going down a similar road to Queensland where the gas industry has taken over vast areas of farmland, disrupting people’s lives and damaging land and water.

“Victoria has brought in a ban on all onshore gas mining following  a strong grassroots community campaign in that state and it's time for real action in WA.”