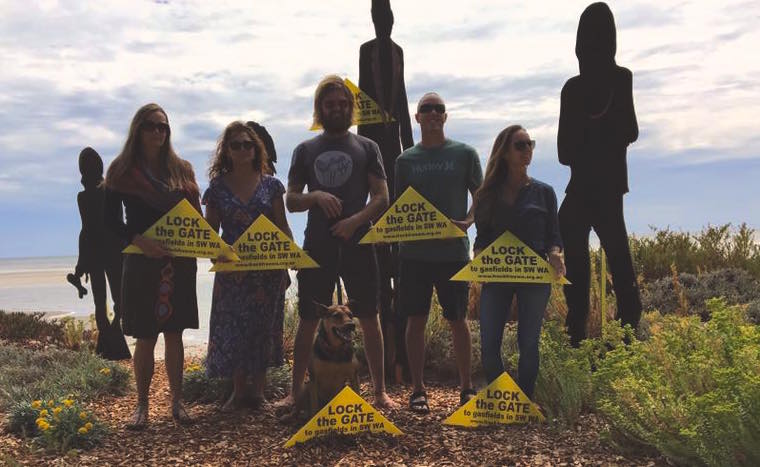 SUNDAY FEBRUARY 26, 2017: The south west community of Quedjinup will declare itself Gasfield Free at a special celebration at the Old Dunsborough Boat Ramp in Dunsborough this morning (Sunday February 26) at 10.30am.

The celebration will be followed in the afternoon by a mass gathering on the Boyanup Oval in the Shire of Capel to spell out a Gasfield Free message to the Premier.

The Quedjinup declaration comes after an extensive survey of the community where residents were asked if they wanted to declare their area gasfield free.

Organiser of the Dunsborough event Tracy Tucker said the results of the survey were overwhelming with more than 90 per cent of respondents indicating they supported the idea.

“We went house to house, road by road asking residents if they would like to declare Quedjinup Gasfield Free and today we are celebrating a resounding Yes vote,” Ms Tucker said.

“In making this declaration we are joining nearly 440 communities nationwide who have already declared themselves coal or gasfield free.

“It sends a strong message to the gas companies, the Department of Mines and Petroleum and the State Government that there is no social license in our community for gas mining or exploration.

“With an election less than two weeks away we are also sending a loud and clear message to all political candidates that the unconventional gas industry is inappropriate for the south west.

“We have thriving tourism, wine and agricultural industries in the south west and we don’t want to put those industries at risk for a short term invasive industry.

“Quedjinup is the first community in the City of Busselton to declare itself gasfield free and it most certainly wont be the last. We have exploration permit 408 covering a vast area within the city and gas testing at Whicher Range in a priority one drinking water catchment area. We don’t think that is sensible or appropriate.”

The celebration will include an ocean tribute with members of the community taking to their surfboards to form a triangle at sea that will be photographed from the air using a drone.

Ms Tucker said the ocean tribute was an acknowledgement that the people of Quedjinup loved their lifestyle and clean healthy water and did not want their area turned into a gasfield.

The event will be followed by a large gathering in Boyanup in the afternoon where hundreds of people will spell out a Gasfield Free message for the Premier.

That event will take place on the Boyanup Oval, Boyanup at 4pm.

Members of the Quedjinup community will join others from across the south west in creating the message.