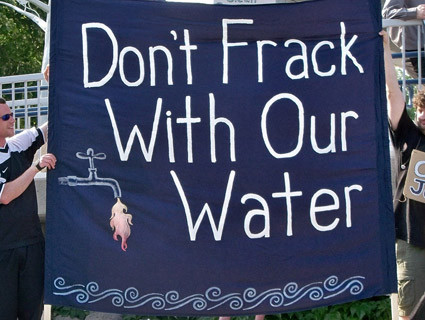 “These meetings are effectively being held behind closed doors in small groups that are prohibited from advocating or debating the issues,” Ms Hammond said.

“It is a far cry from the open and transparent inquiry any fair person would expect we would get.”

The panel today released details of its single round of public meetings as it opened for registrations from people it said had “pertinent information” in each of the regions it will visit.

It said the meetings would have a small group round table format and at least one panel member would be allocated to each table.

Ms Hammond said the format of the meetings was more appropriate to a corporate bonding exercise for a business than a platform to take evidence on an issue that could have a huge impact on the land, water and health of regional WA.

“If fracking is allowed to proceed in WA thousands of people’s lives will be changed forever and their health, water and businesses could end up paying the price for this unnecessary and marginally economic industry,” Ms Hammond said.

“People on the frontline of the fracking threat deserve the right to have their say in an open forum that can be broadcast widely to audiences across the state.

“They also deserve the right to be heard by the entire panel and to hear what the industry is saying to the panel members.

“We need to lift the lid of secrecy and misinformation that pervades the fracking industry and open the issue up to widespread public debate.

“So far we have not heard back from the WA Fracking Inquiry as to whether it will publish an interim report of its findings and open those findings to public submissions. In the absence of any chance to refute the fracking industry’s claims the people of WA could end up seeing their state turned into a fracking wasteland.

“We call on the inquiry and the state government to rethink the format of the public meetings to make them open, transparent and accessible to the general public and the media.

“We further call on the inquiry to commit to publish an interim report of its findings and open that report to public comment.”