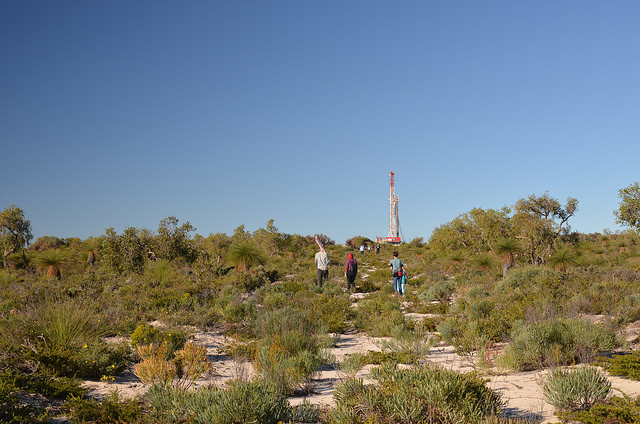 An oil and gas company has abandoned plans to hydraulically frack a well in Western Australia's Mid West.

AWE has been undertaking exploration work at the Drover-1 well, south-east of Greenhead, and was preparing to frack for gas at the site.

The well is located east of Mt Lesueur National Park and is nearby the Mount Peron aquifer and bore field.

The plans fuelled community concern and a debate about fracking close to water reserves.

The Conservation Council of WA's director Piers Verstegen said the local community would be breathing a "sigh of relief" at the news.

"It means there's not going to be a fracking well in their town water supply," he said.

In an announcement to the Australian Securities Exchange, AWE said the decision to not proceed to fracking was based on analysis of tests and core samples.

AWE said that data had provided "sufficient information for AWE's assessment of the shale gas potential in the southern extent of the Perth Basin acreage... and no further work is required at this location".

A spokesman for AWE said the decision was based on commercial considerations.

Mr Verstegen said he believed the strength of the local community opposition to fracking helped to influenced AWE's decision to walk away from its plans.

"I think other companies and investors looking at the Mid West as a potential area for fracking should be very cautious following this news," he said.

"There's very strong community opposition to gas fracking in these areas and if that is your plan, be prepared for a long hard uphill battle.

"We'll now be calling on the State Government to remove the gas fracking exploration permit from this region, following the community's calls for the area and the groundwater to be protected from this industry."

In a statement, Mines Minister Bill Marmion said he would not remove the exploration permit and supported the responsible development of oil and gas in the region.

"The proponent in this case, not only fulfilled their regulatory requirements, but also established a community reference group to engage with the local community," he said.

"They should be praised.

"The State Government is confident it can safely regulate the shale and tight gas industry as it has done for the petroleum industry for the past 40 years.

"The process is not new or unique and has been regulated in the state for quite some time, and since 1958 Western Australia has had more than 600 wells fracture stimulated."