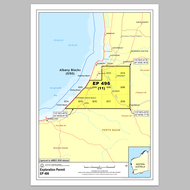 “The Government promised us a fracking ban before to the state election. We understood the promise meant we would be protected from encroachment by the invasive onshore gas industry.

"Instead, the government has granted a new gas exploration permit covering our area,” Ms Thomson said.

“Communities in the permit area such as Stratham, North Boyanup and Stirling have already declared themselves gasfield free.  These communities will not accept being forced to live in a gasfield.

"The decision by the government to grant this permit is a slap in the face to those communities.

“The government is ignoring our right to protect our land, water, health and agriculture into the future.

“We are disappointed and angry that our concerns have been ignored and our rights railroaded.

“We still don’t have any right to say no to gas companies coming on our land to drill for gas.

“The promised fracking bans to protect the south west are still not legislated by the Parliament. Instead we have a ministerial promise that can be reversed at any time.”

Ms Thomson said the government’s promise that the gas would not be fracked was not enough to protect land and water from an invasive and unnecessary industry.

“The company with this permit originally called itself 'Unconventional Resources Pty Ltd' but changed its name after the outcry at their plans to drill in the Bunbury area.”